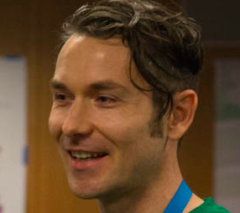 Rowan Bunning is an Australian pioneer of the world’s most widely used Agile framework: Scrum. Rowan learned the disciplines of eXtreme Programming (XP) from a technical coach in 2001 and became one of Australia’s first ScrumMasters in 2003, when he lead an organisation-wide Scrum+XP adoption.

Rowan is one of Australia’s first Agile Coaches, having been hired as such by one of Europe’s foremost Agile consultancies in 2007, subsequently finding himself more effective as a ScrumMaster.

As a Certified Scrum Trainer since 2008, Rowan has delivered over 400 Scrum training courses in Australia, New Zealand, the Philippines, Malaysia, the USA and the U.K.; making him one of the most experienced Agile trainers in the Australasian region.

As an Agile Coach in Europe and Australia, Rowan has a track record of facilitating accelerated Agile adoptions including team building, ScrumMaster mentoring, management consulting and cultural change.

Rowan is an old-hand at the Scrum conferences, having presented a number of times and jointly hosting the Open Space mornings since 2013.

Rowan will be presenting: Leaders of Tomorrow Looking beyond todays misperception of the ScrumMaster role